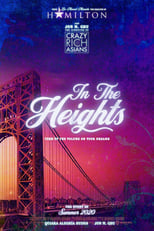 Director Jon M. Chu CastAnthony Ramos, Melissa Barrera & Corey HawkinsRelease Jun 26th, 2020 A feature version of the Broadway musical, in which a bodega owner has mixed feelings about closing his store and retiring to the Dominican Republic after inheriting his grandmother's fortune.
In the Heights is directed by Jon M. Chu and will premiere on Jun 26th, 2020.

Where can you stream In the Heights: Not yet streaming online