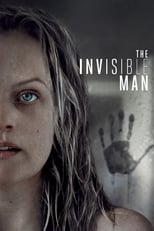 Director Leigh Whannell CastOliver Jackson-Cohen, Elisabeth Moss & Storm ReidRelease Feb 28th, 2020 When Cecilia's abusive ex takes his own life and leaves her his fortune, she suspects his death was a hoax. As a series of coincidences turn lethal, Cecilia works to prove that she is being hunted by someone nobody can see.
The Invisible Man is directed by Leigh Whannell and was released on Feb 28th, 2020.

Where can you stream The Invisible Man: