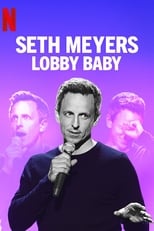 Director Neal Brennan CastSeth Meyers, & Release Nov 5th, 2019 SNL alumnus and subversive master of late-night Seth Meyers comes out from behind the desk to share some lighthearted stories from his own life.
Seth Meyers: Lobby Baby is directed by Neal Brennan and was released on Nov 5th, 2019.

Where can you stream Seth Meyers: Lobby Baby: