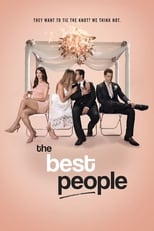 Director Dan Levy Dagerman Cast, & Release TBA Just as she is recovering from a breakdown, Anna's world is rocked when her younger sister gets engaged. She teams up with the alcoholic best man to break up the engagement, convinced they are trying to save her sister, his best friend, and themselves from a lifetime of misery.
The Best People is directed by Dan Levy Dagerman and was released on TBA.

Where can you stream The Best People: '