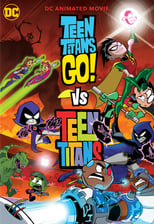 Director Jeff Mednikow CastScott Menville, Hynden Walch & Khary PaytonRelease Sep 24th, 2019 In Teen Titans Go! vs Teen Titans, the comedic modern-day quintet takes on their 2003 counterparts when villains from each of their worlds join forces to pit the two Titan teams against each other. They'll need to set aside their differences and work together to combat Trigon, Hexagon, Santa Claus (that's right, Santa!) and time itself in order to save the multiverse.
Teen Titans Go! vs. Teen Titans is directed by Jeff Mednikow and was released on Sep 24th, 2019.

Netflix
Stay up to date with the steaming options of Teen Titans Go! vs. Teen Titans & other streaming releases