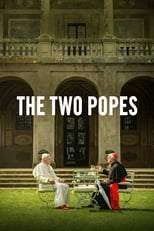 Director Fernando Meirelles CastJonathan Pryce, Anthony Hopkins & Sidney ColeRelease Dec 20th, 2019 Frustrated with the direction of the church, Cardinal Bergoglio requests permission to retire in 2012 from Pope Benedict. Instead, facing scandal and self-doubt, the introspective Pope Benedict summons his harshest critic and future successor to Rome to reveal a secret that would shake the foundations of the Catholic Church.
The Two Popes is directed by Fernando Meirelles and was released on Dec 20th, 2019.

Where can you stream The Two Popes: