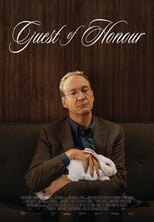 Director Atom Egoyan CastDavid Thewlis, Laysla De Oliveira & Luke WilsonRelease Apr 10th, 2020 Jim and his daughter Veronica, a young high-school music teacher, attempt to unravel their complicated histories and intertwined secrets. After a hoax goes very wrong, Jim's daughter is falsely convicted of abusing her position of authority over 17-year-old Clive. Veronica is nevertheless convinced she deserves to be punished, but for much earlier crimes. Confused and frustrated by Veronica’s...
Guest of Honour is directed by Atom Egoyan and was released on Apr 10th, 2020.

Where can you stream Guest of Honour: Not yet streaming online