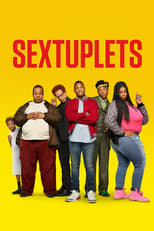 Director Michael Tiddes CastMarlon Wayans, Michael Ian Black & Molly ShannonRelease Aug 16th, 2019 Father-to-be Alan is shocked to learn that he was born a sextuplet. With his newfound brother Russell riding shotgun, the duo sets out on a hilarious journey to reunite with their remaining long-lost siblings.
Sextuplets is directed by Michael Tiddes and was released on Aug 16th, 2019.

Where can you stream Sextuplets: