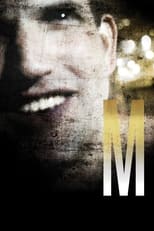 Director Yolande Zauberman Cast, & Release Mar 20th, 2019 Menahem Lang, an actor with an extraordinary singing voice, returns to Bnei Brak, the city in Israel where he grew up and a center of ultra-orthodox Judaism. Now in his 30s, Lang left the city at 20, following years of rape and sexual abuse by elder, devout family men in the community. Yet, Lang was far from being an isolated case: his conversations with other abused young men document a cycle of...
M is directed by Yolande Zauberman and was released on Mar 20th, 2019.

Where can you stream M: