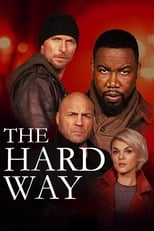 Director Keoni Waxman CastMichael Jai White, Luke Goss & Randy CoutureRelease Mar 5th, 2019 After learning of his brother's death during a mission in Romania, a former soldier joins two allies to hunt down a mysterious enemy and take his revenge.
The Hard Way is directed by Keoni Waxman and was released on Mar 5th, 2019.

Where can you stream The Hard Way: