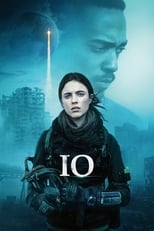 Director Jonathan Helpert CastMargaret Qualley, Anthony Mackie & Danny HustonRelease Jan 18th, 2019 As a young scientist searches for a way to save a dying Earth, she finds a connection with a man who's racing to catch the last shuttle off the planet.
IO is directed by Jonathan Helpert and was released on Jan 18th, 2019.

Where can you stream IO: