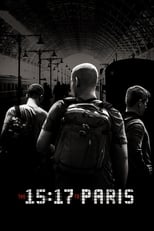 Director Clint Eastwood CastSpencer Stone, Alek Skarlatos & Anthony SadlerRelease Feb 9th, 2018 In August 2015, an ISIS terrorist boarded train #9364 from Brussels to Paris. Armed with an AK-47 and enough ammo to kill more than 500 people, the terrorist might have succeeded except for three American friends who refused to give in to fear. One was a college student, one was a martial arts enthusiast and airman first class in the U.S. Air Force, and the other was a member of the Oregon...
The 15:17 to Paris is directed by Clint Eastwood and was released on Feb 9th, 2018.

Stay up to date with the streaming options of The 15:17 to Paris & other streaming releases