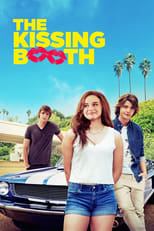 Director Vince Marcello CastJoey King, Joel Courtney & Jacob ElordiRelease May 11th, 2018 When teenager Elle's first kiss leads to a forbidden romance with the hottest boy in high school, she risks her relationship with her best friend.
The Kissing Booth is directed by Vince Marcello and was released on May 11th, 2018.

Where can you stream The Kissing Booth: