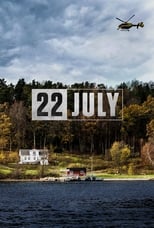 Director Paul Greengrass CastJonas Strand Gravli, Anders Danielsen Lie & Jon ØigardenRelease Oct 10th, 2018 In Norway on 22 July 2011, right-wing terrorist Anders Behring Breivik murdered 77 young people attending a Labour Party Youth Camp on Utöya Island outside of Oslo. This three-part story will focus on the survivors of the attacks, the political leadership of Norway, and the lawyers involved.
22 July is directed by Paul Greengrass and was released on Oct 10th, 2018.

Where can you stream 22 July: