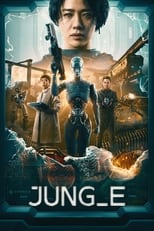 Director Sang-ho Yeon CastKim Hyun-joo, Kang Soo-youn & Ryu Kyung-sooRelease Jan 20th, 2023 On an uninhabitable 22nd-century Earth, the outcome of a civil war hinges on cloning the brain of an elite soldier to create a robot mercenary.
Jung_E is directed by Sang-ho Yeon and was released on Jan 20th, 2023.

Where can you stream Jung_E: