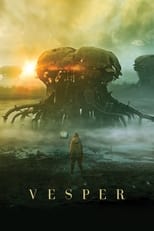 Director Kristina Buozyte, Bruno Samper CastRaffiella Chapman, Eddie Marsan & Rosy McEwenRelease Sep 30th, 2022 After the collapse of Earth's ecosystem, Vesper, a 13-year-old girl struggling to survive with her paralyzed Father, meets a mysterious Woman with a secret that forces Vesper to use her wits, strength and bio-hacking abilities to fight for the possibility of a future.
Vesper is directed by Kristina Buozyte, Bruno Samper and was released on Sep 30th, 2022.

Where can you stream Vesper: