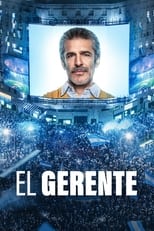 Director Ariel Winograd CastLeonardo Sbaraglia, Carla Peterson & Luis LuqueRelease Oct 20th, 2022 Álvaro is a marketing manager, divorced with a son who he can barely talk to, living a mediocre life and doing a mediocre job, until his bosses tell him he needs to improve his marketing campaigns for the next 2018's World Cup. He'll soon launch a plan with Argentina's National Football Team and the upcoming qualifiers that may become a lot more risky that he planned.
El gerente is directed by Ariel Winograd and was released on Oct 20th, 2022.

Where can you stream El gerente: Not yet streaming online