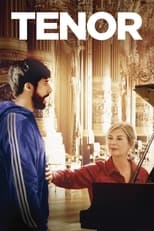 Director Claude Zidi Jr. CastMichèle Laroque, MB14 & Roberto AlagnaRelease May 4th, 2022 While working part-time as a food deliveryman, Antoine, an aspiring young rapper from the suburbs of Paris, meets Mrs. Loiseau, an eminent teacher at the Paris Opéra. Stunned by the young man's raw talent, she introduces him to the world of opera. As Antoine becomes one of Mrs. Loiseau's students, he hides his new dream from his friends and family, fearing that they won’t understand – this...
Tenor is directed by Claude Zidi Jr. and was released on May 4th, 2022.

Where can you stream Tenor: Not yet streaming online