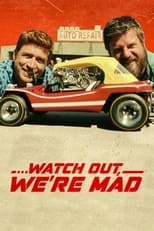 Director Younuts CastEdoardo Pesce, Alessandro Roja & Alessandra MastronardiRelease Aug 24th, 2022 Carezza and Sorriso, brothers very different from each other and in quarrel since childhood, will have to put aside their controversies to recover the legendary Dune Buggy, once belonged to their beloved father and now stolen from him by Torsillo, an unscrupulous building speculator, and his son Raniero. In doing so, they will forge an unusual alliance with a circus community, headed by the...
Watch Out, We’re Mad is directed by Younuts and was released on Aug 24th, 2022.

Where can you stream Watch Out, We’re Mad:

No trailer released yet
Stay up to date with the streaming options of Watch Out, We’re Mad & other streaming releases