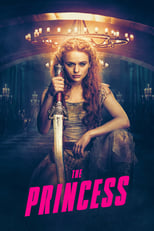 Director Le-Van Kiet CastJoey King, Dominic Cooper & Olga KurylenkoRelease Jul 1st, 2022 A beautiful, strong-willed young royal refuses to wed the cruel sociopath to whom she is betrothed and is kidnapped and locked in a remote tower of her father’s castle. With her scorned, vindictive suitor intent on taking her father’s throne, the princess must protect her family and save the kingdom.
The Princess is directed by Le-Van Kiet and was released on Jul 1st, 2022.

Where can you stream The Princess: