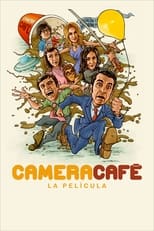 Director Ernesto Sevilla CastArturo Valls, Carlos Chamarro & Manuel GalianaRelease Mar 25th, 2022 Jesús Quesada, an incompetent executive, is appointed as the new director of a company in decline whose survival will now depend on both the ingenuity and ambition of his former colleagues.
Camera Cafe: The Movie is directed by Ernesto Sevilla and was released on Mar 25th, 2022.

Where can you stream Camera Cafe: The Movie: Not yet streaming online

No trailer released yet
Stay up to date with the streaming options of Camera Cafe: The Movie & other streaming releases