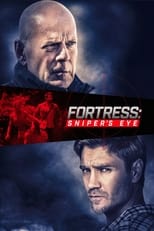 Director Josh Sternfeld CastChad Michael Murray, Bruce Willis & Jesse MetcalfeRelease Apr 29th, 2022 Weeks after the deadly assault on Fortress Camp, Robert makes a daring rescue to save Sasha, the widow of his old nemesis Balzary. But back in the camp's command bunker, it appears Sasha may have devious plans of her own. As a new attack breaks out, Robert is confronted with a familiar face he thought he'd never see again…
Fortress: Sniper’s Eye is directed by Josh Sternfeld and was released on Apr 29th, 2022.

Where can you stream Fortress: Sniper’s Eye:

Stay up to date with the streaming options of Fortress: Sniper’s Eye & other streaming releases