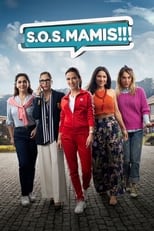 Director Gabriela Sobarzo CastPaz Bascuñan, Loreto Aravena & María Elena SwettRelease Mar 18th, 2022 Trini's daughter is sad that her best friend is leaving Saint Michael School since her mother can't keep paying for it. Trini promises her daughter that this won't happen and decides to put together a plan with the other "mamis" of the group to solve the problem. But this mission will be much more difficult than they thought and they will have to stick together as a group.
S.O.S. Mamis: La película is directed by Gabriela Sobarzo and was released on Mar 18th, 2022.

Where can you stream S.O.S. Mamis: La película: Not yet streaming online

No trailer released yet
Stay up to date with the streaming options of S.O.S. Mamis: La película & other streaming releases