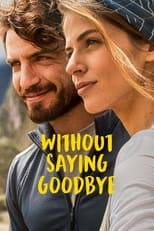 Director Bruno Ascenzo CastMaxi Iglesias, Stephanie Cayo & Release Mar 18th, 2022 The opposite lives of a workaholic architect and a fiery artist are upended when their chance encounter in breathtaking Peru shifts their views on life.
Without Saying Goodbye is directed by Bruno Ascenzo and was released on Mar 18th, 2022.

Where can you stream Without Saying Goodbye: