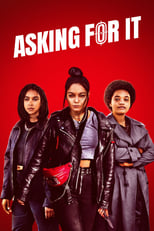 Director Eamon O'Rourke CastKiersey Clemons, Vanessa Hudgens & Alexandra ShippRelease Mar 4th, 2022 After small town waitress Joey is sexually assaulted after a date with her old friend Mike, she befriends mysterious stranger Regina. Regina introducers her to The Cherry Bombers, an all femme gang including Beatrice, Lily, Sal, Jett, Angie, and Fala. All suffering from past traumas, together they fight a misogynistic society by targeting violent frat boys, a corrupt police force of human...
Asking For It is directed by Eamon O'Rourke and was released on Mar 4th, 2022.

Where can you stream Asking For It: