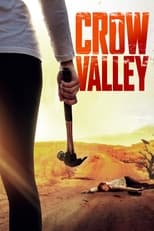 Director Josh Conn CastJosh Conn, Nicole Freeman & Jessica LeamingRelease TBA Mountain biker Benny Jones sets off on a weekend ride to remote Crow Valley but is knocked off his bike in a brutal hit and run. He wakes badly injured in an abandoned cabin where he meets young hiker Greta. When her lies and sanity start to unravel he finds himself in a desperate fight for survival.
Crow Valley is directed by Josh Conn and was released on TBA.

Where can you stream Crow Valley: Not yet streaming online