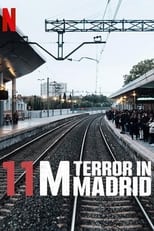 Director Jose Gomez Cast, & Release Feb 23rd, 2022 Survivors and insiders recount March 11, 2004's terrorist attack on Madrid, including the political crisis it ignited and the hunt for the perpetrators.
11M is directed by Jose Gomez and was released on Feb 23rd, 2022.

Where can you stream 11M: Not yet streaming online