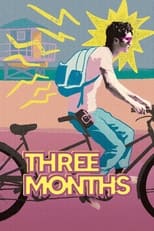 Director Jared Frieder CastTroye Sivan, Viveik Kalra & Brianne TjuRelease Feb 23rd, 2022 Coming-of-age film about Caleb, a South Florida teen. On the eve of his high school graduation, everything changes when he's exposed to HIV. While he waits three months for his results, he finds love in the most unlikely of places.
Three Months is directed by Jared Frieder and was released on Feb 23rd, 2022.

Where can you stream Three Months: Not yet streaming online DVD/Bluray via Amazon