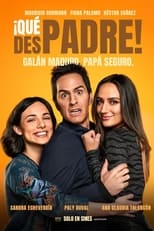 Director Pitipol Ybarra CastMauricio Ochmann, Fiona Palomo & Sandra EcheverríaRelease Feb 17th, 2022 Pedro is a single man in his forties who likes to party, has no children and lives at night. Everything changes when he meets Alin. She mentions to him that she is looking for her dad and that there is a high probability that it is him.
¡Qué Despadre! is directed by Pitipol Ybarra and was released on Feb 17th, 2022.

Where can you stream ¡Qué Despadre!: Not yet streaming online

No trailer released yet
Stay up to date with the streaming options of ¡Qué Despadre! & other streaming releases