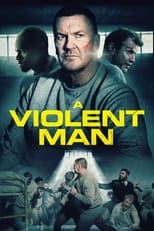 Director Ross McCall CastCraig Fairbrass, Jason Flemyng & Stephen OdubolaRelease Feb 4th, 2022 Steve Mackleson is a dangerous prisoner, incarcerated for double murder in a maximum security prison. We follow, as he navigates his struggle against redemption the system and his inner turmoil, when a young black gang member becomes his unlikely new cell mate and a daughter he has never met, finally requests to meet her estranged father, face to face.
A Violent Man is directed by Ross McCall and was released on Feb 4th, 2022.

Where can you stream A Violent Man: Not yet streaming online