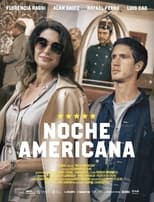 Director CastFlorencia Raggi, Rafael Ferro & Alan DaiczRelease Jan 1st, 1970 Iván is an unknown 24-year-old musician who receives the news that his flight from Rome has been cancelled. Once at the hotel, he discovers that an Argentine movie star twenty years older than him is in the same situation. Everything seems like a dream for Iván when she opens the door to an affair, but the tension grows when the actress's husband and daughter arrive.

Where can you stream Noche americana: Not yet streaming online DVD/Bluray via Amazon