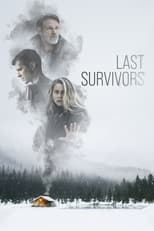 Director Drew Mylrea CastDrew Van Acker, Alicia Silverstone & Stephen MoyerRelease Feb 3rd, 2022 The pic is set in the aftermath of an apocalyptic event that forces people into extreme isolation. A father and son, who have been living off grid for 20 years, encounter an outsider who threatens to destroy the utopia they’ve built.
Last Survivors is directed by Drew Mylrea and was released on Feb 3rd, 2022.

Where can you stream Last Survivors: Not yet streaming online