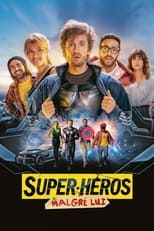 Director Philippe Lacheau CastPhilippe Lacheau, Élodie Fontan & Julien ArrutiRelease Feb 2nd, 2022 Struggling actor Cedric seems doomed to lead the life of a loser. He's broke and his girlfriend has dumped him. Even his own father, sister and best buddies have lost faith in his ability to do anything worthwhile. Then finally, he gets a lead role: the superhero “Badman“. A chance to pull himself out of an endless downward spiral and gain his father's respect. But fate strikes again! Rushing...
Superwho? is directed by Philippe Lacheau and was released on Feb 2nd, 2022.

Where can you stream Superwho?: Not yet streaming online

No trailer released yet
Stay up to date with the streaming options of Superwho? & other streaming releases