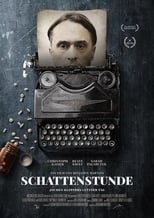 Director Benjamin Martins CastChristoph Kaiser, Beate Krist & Sarah PalarczykRelease Jan 27th, 2022 In 1942, Christian writer Jochen Klepper lived with his Jewish wife and daughter in Berlin, Germany. Their applications to emigrate got rejected and they became part of the last and sad defense of the Jewish-Christian community.
The Shadow Hour is directed by Benjamin Martins and was released on Jan 27th, 2022.

Where can you stream The Shadow Hour: Not yet streaming online