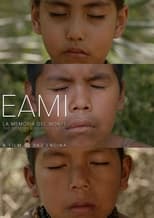 Director Paz Encina Cast, & Release TBA Eami means ‘forest’ in Ayoreo. It also means ‘world’. The story happens in the Paraguayan Chaco, the territory with the highest deforestation rate in the world. 25,000 hectares of forest are being deforested a month in this territory which would mean an average of 841 hectares a day or 35 hectares per hour. The forest barely lives and this only due to a reserve that the Totobiegosode...
EAMI is directed by Paz Encina and was released on TBA.

Where can you stream EAMI: Not yet streaming online