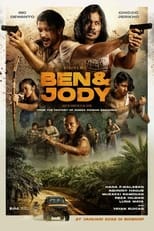 Director Angga Dwimas Sasongko CastChicco Jerikho, Rio Dewanto & Yayan RuhianRelease Jan 27th, 2022 Since deciding to leave Filosofi Kopi, Ben has lived in his hometown and has been actively defending farmer groups whose lands have been taken over by the Company. At the same time, Jody is preparing a new concept for Filosofi Kopi which will be launched soon. Ahead of the launch event, Ben who was scheduled to attend suddenly disappears. Jody sets out to find Ben. In order to save Ben, they face...
Ben & Jody is directed by Angga Dwimas Sasongko and was released on Jan 27th, 2022.

Where can you stream Ben & Jody: Not yet streaming online