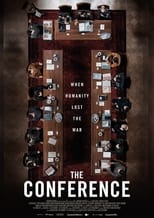 Director Matti Geschonneck CastPhilipp Hochmair, Johannes Allmayer & Maximilian BrücknerRelease Jan 18th, 2022 On January 20, 1942, high-ranking representatives of the German Nazi regime met in an idyllic villa on the Great Wannsee in the southwest of Berlin for a meeting that went down in history as the Wannsee Conference, because of its disastrous consequences perhaps the most terrible conference of human history. Present are 15 leading men of the SS, the NSDAP and the ministerial bureaucracy. They were...
Die Wannseekonferenz is directed by Matti Geschonneck and was released on Jan 18th, 2022.

Where can you stream Die Wannseekonferenz: Not yet streaming online