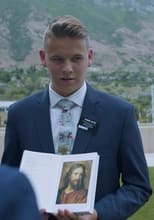 Director Tania Anderson Cast, & Release Jan 24th, 2022 Four American teenagers have received a mission from God that takes them from the safety of their remote religion-filled bubbles to the other side of the planet. In the frozen forested lands of Finland, these impassioned, wide-eyed teens confront local Finns, Europe’s most non-religious and private people, and attempt to convert them to their faith, the Church of Jesus Christ of Latter-Day...
The Mission is directed by Tania Anderson and was released on Jan 24th, 2022.

Where can you stream The Mission: Not yet streaming online