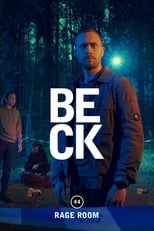 Director N/A CastPeter Haber, Kristofer Hivju & Jennie SilfverhjelmRelease Jan 21st, 2022 A man is found brutally murdered at a running track in the woods. At the same time, Josef resumes the relationship with a former girlfriend from school, Cissi, whose father recently died of a sudden heart attack during a robbery. Josef goes against Alex's directive and begins an unofficial investigation into Cissi's father's death, which puts him in a complicated conflict situation.
Beck 44 – Rage Room is directed by N/A and was released on Jan 21st, 2022.

Where can you stream Beck 44 – Rage Room: Not yet streaming online DVD/Bluray via Amazon