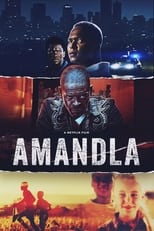 Director Nerina De Jager CastLemogang Tsipa, Israel Makoe & Thabo RametsiRelease Jan 21st, 2022 Amandla is an anti-apartheid resistance slogan and means power. Apartheid in South Africa is still in full force when, in 1987, the two brothers Impi and Nkosana grew up on a farm as the sons of servants. The white owners are liberal people who aren't too particular about racial segregation. Black Africans have it relatively good there. Even a tender love bond develops between Impi and the blond...
Amandla is directed by Nerina De Jager and was released on Jan 21st, 2022.

Where can you stream Amandla: