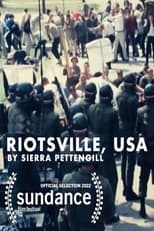 Director Sierra Pettengill CastCharlene Modeste, & Release Jan 21st, 2022 An archival documentary about the U.S. military’s response to the political and racial injustices of the late 1960s: take a military base, build a mock inner-city set, cast soldiers to play rioters, burn the place down, and film it all.
Riotsville, USA is directed by Sierra Pettengill and was released on Jan 21st, 2022.

Where can you stream Riotsville, USA: Not yet streaming online

No trailer released yet
Stay up to date with the streaming options of Riotsville, USA & other streaming releases