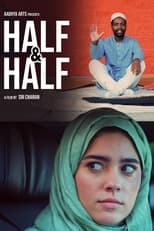 Director Sri Charan CastJohnny Jordan Jr., Tamara Albishah & Arrash PirastehRelease Jan 18th, 2022 Two worlds collide as an unlikely friendship forms between an optimistic homeless man, Adam, and a jaded young bride, Amira, as they discover they're both playing to win one million dollars and agree to split the winning share half and half.
Half & Half is directed by Sri Charan and was released on Jan 18th, 2022.

Where can you stream Half & Half: Not yet streaming online DVD/Bluray via Amazon