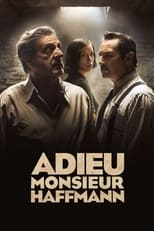 Director Fred Cavayé CastDaniel Auteuil, Gilles Lellouche & Sara GiraudeauRelease Jan 12th, 2022 Paris 1942. François Mercier is an ordinary man who only aspires to start a family with the woman he loves, Blanche. He is also the employee of a talented jeweler, Mr. Haffmann. But faced with the German occupation, the two men will have no other choice but to conclude an agreement whose consequences, over the months, will upset the fate of our three characters.
Adieu Monsieur Haffmann is directed by Fred Cavayé and was released on Jan 12th, 2022.

Where can you stream Adieu Monsieur Haffmann: Not yet streaming online