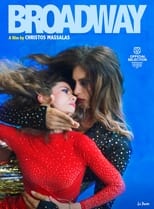 Director Christos Massalas CastElsa Lekakou, Foivos Papadopoulos & Stathis ApostolouRelease Jan 25th, 2022 Nelly has escaped from her wealthy and controlling family. As she dances in a strip club, she meets Markos, a small yet charismatic gangster, who helps her run away from her stepfather’s henchmen. Markos soon becomes her protector and lover. He brings her into Broadway, Athens, an abandoned entertainment complex squatted by a small community of dancers, tramps, thieves and a captive monkey. For...
Broadway is directed by Christos Massalas and was released on Jan 25th, 2022.

Where can you stream Broadway: Not yet streaming online