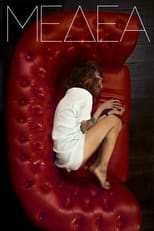 Director Aleksandr Zeldovich CastTinatin Dalakishvili, Yevgeni Tsyganov & Evgeny KharitonovRelease Nov 18th, 2021 Medea is an intelligent, highly educated woman who gives up on her dreams when she falls for rich businessman Alexei. When the pair have two children, she patiently waits for him to divorce his wife, and as he decides to emigrate from Russia to Israel, she meekly follows him. But when he shuns her for having committed a crime to protect him, her blind love turns into burning rage.
Medea is directed by Aleksandr Zeldovich and was released on Nov 18th, 2021.

Where can you stream Medea: Not yet streaming online