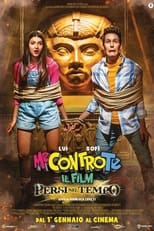 Director CastSofia Scalia, Luigi Calagna & Michele SavoiaRelease Jan 1st, 1970 It is a special day for Luì, who is finally about to receive his diploma as a scientist, and as always, Sofì is there by his side to support him and give him courage. Pongo, their loyal friend, certainly cannot miss the event. Once again, however, Mr. S and Perfidia will try to undermine the Me against You but Sofì, with the powers of a fairy, and Luì, with the best technology worthy of a true...

Where can you stream Me contro Te: Il film – Persi nel tempo: Not yet streaming online DVD/Bluray via Amazon

No trailer released yet
Stay up to date with the streaming options of Me contro Te: Il film – Persi nel tempo & other streaming releases