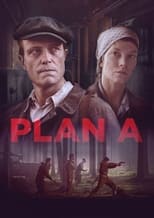 Director Doron Paz, Yoav Paz CastAugust Diehl, Sylvia Hoeks & Michael AloniRelease Dec 9th, 2021 Germany 1945, Max, a Jewish Holocaust survivor, meets a radical group of Jewish resistance fighters, who, like him, lost all hope for their future after they were robbed of their existence and their entire families were killed by the Nazis. They dream of retaliation on an epic scale for the Jewish people. An eye for an eye, a tooth for a tooth. Max starts identifying with the group's monstrous...
Plan A is directed by Doron Paz, Yoav Paz and was released on Dec 9th, 2021.

Where can you stream Plan A: Not yet streaming online