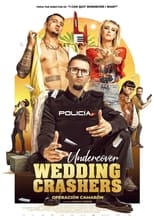 Director Carlos Therón CastJulián López, Natalia de Molina & Carlos LibradoRelease Jun 24th, 2021 Geeky-looking Sebas is a surprisingly good classical musician. He’s also a complete unknown in the criminal underworld, and as a new newbie on the police force, that makes him the perfect man for a dangerous mission: to go undercover as a keyboard player for “Los Lolos”, a cheesy flamenco-trap band, who have been hired to play at the wedding of a local mafia boss’ daughter that a major...
Undercover Wedding Crashers is directed by Carlos Therón and was released on Jun 24th, 2021.

Where can you stream Undercover Wedding Crashers: Not yet streaming online