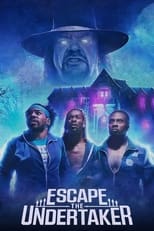 Director N/A CastMark Calaway, Kofi Sarkodie-Mensah & Austin WatsonRelease Oct 5th, 2021 The Undertaker has set a trap for the decorated tag team The New Day at his mansion. What they don't know: The Undertaker's mansion is an extreme Haunted House, packed to the brim with supernatural challenges. It's up to viewers to decide the fate of these poor souls trying to survive the wrath of The Undertaker.
Escape The Undertaker is directed by N/A and was released on Oct 5th, 2021.

Where can you stream Escape The Undertaker: