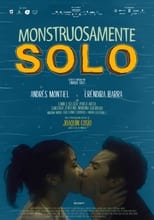 Director Enrique Cruz CastEréndira Ibarra, Andrés Montiel & Camila SelserRelease Sep 5th, 2021 Santiago is contained in the micro-universe of his home due to a deep depression after his girlfriend left him for no apparent reason. That is when he realizes that even though he wants to live his duel alone, his friends accompany him through video chats, telephone calls or visits right at his door.
Monstruosamente Solo is directed by Enrique Cruz and was released on Sep 5th, 2021.

Where can you stream Monstruosamente Solo: Not yet streaming online